THE UK, BREXIT AND SELF-DETERMINATION

The RIC-Edinburgh meeting held on Wednesday 27th September had two topics and speakers. 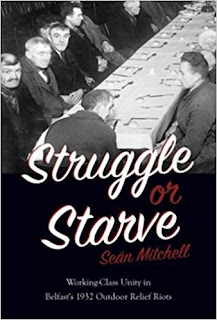 There was a presentation of the new book by Sean Mitchell entitled  Struggle or Starve: Working Class Unity in Belfasts's Outdoor Relief Riots. Sean is from People before Profit and lives in Belfast. Tommy McKearney of the Irish Independent Workers Union, who spoke with Allan Armstrong in Belfast during the Scottish independence referendum campaign, has written a review which can be seen at:-

Sean also described how People before Profit had successfully campaigned on an anti-austerity platform, winning a council seat in West Belfast and three seats at Stormont, reduced to two in the last election. Sinn Fein had been able to make some comeback by hardening its position with regard to the DUP, particularly over Irish language rights and opposition to Brexit, but it had been part of the Stormont government which had imposed Westminster cuts.

Questioners very much welcomed Sean's new book with its demonstration of the possibility of uniting the working class in Ireland over the sectarian divide. The opportunity was taken to get further information, which is covered in the book. It was also suggested they maybe socialists should adopt their own pan-European strategy instead of either tail ending the EU like Sinn Fein and the SNP, or providing coverer the reactionary Brexiters, who now formed the May/DUP coalition. Sean replied that People before Profit's position was designed to undermine Sinn Fein's illusions in the EU, and that People before Profit was taking its anti-EU message to the 26 Counties too. 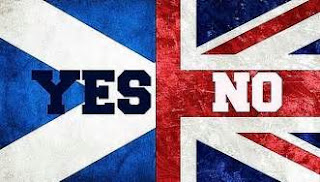 The other topic was Neil Davidson, who spoke  on The UK, Brexit and Self-Determination, His talk was based on the article, Scotland after Brexit written for the American socialist magazine, Jacobin.

This can be viewed at:- https://www.jacobinmag.com/2016/07/scotland-independence-referendum-brexit-nicola-sturgeon

Those who made contributions on Neil's talk argued that the Brexit vote had pulled politics sharply to the Right in the UK. In reality the Lexiters had as little effect on Brexit campaign  as the Red Paper Collective which had argued for 'No' in IndyRef1 had on the Right wing trajectory of that campaign.

Neil emphasised the importance of relating to those poorest sections of the working class that had voted for Brexit. He saw the Corbyn campaign as an example of a progressive outcome from Brexit.

Nick Gotts who was the meeting sent in this further comment:


Those who attended Wednesday’s RIC Edinburgh Assembly on “Where Next for the Left: the UK, Brexit, and the Road to Self-Determination”, will have heard Neil Davidson argue against the claim (which, incidentally, no-one had made) that the Brexit vote was all about immigration. He also suggested that an important factor was resentment against being told how to vote by David Cameron and George Osborne. Actual analyses of voting intention and performance (for example those found at https://www.ipsos.com/ipsos-mori/en-uk/immigration-now-top-issue-voters-eu-referendum, http://lordashcroftpolls.com/2016/06/how-the-united-kingdom-voted-and-why/, and https://www.independent.co.uk/news/uk/politics/eu-referendum-result-7-graphs-that-explain-how-brexit-won-eu-explained-a7101676.html) indicate that while immigration was by no means the only issue, it was of crucial importance, and that dislike not only of immigration, but of multiculturalism, feminism, environmentalism and social liberalism were strong predictors of a “Leave” vote (dislike of globalisation was a weaker one, while dislike of capitalism showed no correlation with or against a “Leave” vote). As far as resentment of being told what to do by Cameron and Osborne is concerned, one might have expected this to have been weakest among Tory voters – but apart from UKIP voters, Tories were the only party with a majority of Leave supporters.

Demographically, age and level of education were the strongest predictors (the younger and more highly educated being more likely to vote Remain – as were the better off, although less strongly), although it’s also worth noting that a majority of members of all non-white ethnic groups (except Sikhs, if they are regarded as an ethnic group) voted to Remain, while a majority of whites voted Leave. Majorities of Christians, Jews and Sikhs voted Leave, while majorities of Muslims, Hindus and those with no religion voted to Remain. The majority Christian vote to Leave seems to have been mostly down to members of the Church of England: http://www.brin.ac.uk/2017/how-religious-groups-voted-at-the-2016-referendum-on-britains-eu-membership/.

In sum, the quintessential Leave voter is an old, white, Tory (or UKIP) member of the C. of E. with no educational qualifications and a dislike of immigration, multiculturalism, feminism, environmentalism and social liberalism)

Allan Armstrong sent a link to his critique of Jeremy Corbyn, including how he is dealing with Brexit:-