REPORT OF THE GALLOWAY ROADSHOW IN EDINBURGH

REPORT OF THE GALLOWAY ROADSHOW IN EDINBURGH 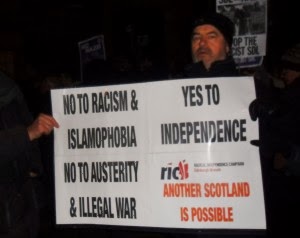 On Monday 3rd February, George Galloway brought his ‘Just Say Naw’ roadshow to the Assembly Rooms in Edinburgh. There were over 150 people in attendance, including Labour Left unionist sympathisers, a few Scottish nationalists, Irish-Scottish republicans and members of the Edinburgh Radical Independence Campaign. Tickets were £10 a head, but in order to get a fuller house, free tickets had been released at the last minute. RIC was able to get some of these.

RIC debated how it should relate to this event. Quite clearly Galloway has been using his roadshow to try to poison the waters of the independence debate. He has made accusations of ingrained Scottish anti-Catholicism, only held back by support for the Union and Labour. This accusation had already spectacularly backfired, when he accused West Lothian council of sectarian bias, after they refused to provide a meeting place for his roadshow. West Lothian though is not an SNP-run, but a Labour-run council!

RIC realised though, that as well as some die-hard Labour unionists, Galloway could still attract others more open to debate. People remember his better days during the time of the Iraq War. Indeed, an obvious contradiction of Galloway so publicly throwing himself into the ‘No’ camp, is all the allies he now has in ‘Project Fear’.  There is pro-war Labour, Alistair Darling, and Tory, David Cameron, as well as Lib-Dem, Nick Clegg, who wants British troops in Syria today! And to these people you can add the unofficial ‘No’ camp with UKIP, the Orange Order and Loyalists, the BNP and SDL!

RIC decided to hand out leaflets to those coming into and leaving the meeting to show that those supporting Scottish independence stretched considerably beyond, and to the Left of the SNP. RIC also held up to hold up two banners outside the meeting with the RIC logo prominently displayed:-

NO TO RACISM AND ISLAMOPHOBIA,
NO TO AUSTERITY AND ILLEGAL WARS;
YES TO INDEPENDENCE,
ANOTHER SCOTLAND IS POSSIBLE

However, there was an added complication. The SDL decided to show up to condemn Galloway as a ‘traitor’ because of his support for Muslims in Britain. The SDL has had some problems trying to inject the Islamophobia of its much larger parent, the EDL, into Scottish fascist politics. In the 1930s Mosley had similar problems bringing his anti-Semitism to Scotland. The British right populist/fascist franchise in Scotland had already been cornered by Loyalist organisations, like John Cormack’s Protestant Action (which won over 30% of the vote in the Edinburgh local elections). The prime basis for British fascism in Scotland has always been anti-Catholic and anti-Irish Loyalism, and upholding the Union. Since the purpose of Galloway’s visit was precisely to uphold the Union, only a dozen SDL members could see the point of a counter-demonstration.

However, to counter the tiny SDL presence, Unite Against Fascism mobilised about 80 people. The resulting very one-sided shouting and name-calling amounted to ‘a dialogue of the deaf’. UAF insist the SDL are German-style Nazis, whilst the SDL hotly deny this. The SDL forgot to bring the Israeli state flag, which they frequently fly, but the joined in some of the anti-Nazi chants, started up by UAF supporters! This may indeed have caused some confusion amongst the ‘Nazi-haters’ in UAF.

However, the SDL identify with the UK’s very own unionist, racist and imperialist tradition, with a special fondness for very British fascism of the UVF and UDA. Yes, they still attract some old-style Nazis, but that is not the political trajectory the majority are following, anymore than the majority members of the post-1968 Communist Parties have all been Stalin worshippers.

Once the meeting started (cue - Gerry Rafferty’s Stuck in the Middle with You) Galloway began his perfomance well enough, with some knock-about humour directed against the SDL and Scottish nationalists. Had all Galloway’s remarks been in the tenor of those reported by The Herald journalist, Mark McLaughlin, then a good political discussion could have resulted. However, those who questioned Galloway turned out not to be members of the SNP or Scottish nationalists, whom he had anticipated.

The questioners were Scottish internationalists, who think that the prospect of the break-up of the UK its anti-democratic politics would be beneficial for workers in England, Wales and Ireland too. The UK state weighs heavily on all our backs. For Scottish internationalists the purpose of Scotland beginning a process of breaking away from the UK, is not to leave the people of England, Wales or Northern Ireland stranded in an eternal Tory dominated ‘Britain’. It is to provide an example so that others will follow.

Galloway could not cope with these arguments and just resorted to a combination of personalised abuse and puffing up his own political record and the role of Westminster. It is unlikely that even his keenest supporters were entirely happy with his personal attacks on socialists, whom he dismissed as “ultra-left”, and his calling SNP Depute Leader, Nicola Sturgeon, “Thatcher in a kilt”. The SNP has moved beyond being Tartan Tory to becoming Tartan social democrats. It just makes you wonder where Galloway’s attack on Nicola Sturgeon would place Johann Lamont politically!

Galloway treated each query as a stand-alone opportunity to put down the questioner. He also showed absolutely no regard for consistency from one answer to the next. Damning attempts by small nations to break free from unionist or imperial domination, he invoked James Connolly’s famous criticism of Irish nationalists, “If you hoist the green flag over Dublin castle, England would still rule you”. Yet Connolly famously led the worker-based Irish Citizen Army in the 1916 Easter Rising to win Irish independence. Galloway was especially enthusiastic about Castro’s Cuba. When Cuba fought free of US imperial control, it had a population not much larger than Scotland’s today. Cuba was then under the tight grip of the USA with its population of 150 million.

It is the politics of those fighting for emancipation and liberation, which will decide both their willingness to really challenge corporate capital, and to provide the inspiration for others in the world to do likewise. The UK state may be larger than Scotland, and the British Labour Party may cover a greater geographical area. However, the UK state and British Labour are both totally tied into to US/UK imperialism and the banksters’ austerity programme. They form no basis for any challenge to the existing order.

It took a long time during the meeting, but in the end, Galloway did offer his alternative to those he dismissed as  “ultra Left”. He asked his audience to reclaim the Labour Party. He put the blame for the problem that Labour faces in the hands of New Labour, who had stolen the party. He especially attacked Gordon Brown and Alistair Darling’s role in this, emphasising they are Scots! (It’s their Labourism not their nationality that is the problem). He thinks Miliband is an improvement, albeit saying there is need for further improvement yet.  He completely fails to see that ‘One Nation’ Labour is merely ‘New Labour’ updated for a period of opposition.

As for Galloway’s strategy for reclaiming Labour for the Left in Scotland, he is living in his own ‘Brigadoon’. Len McCluskey, leader of the largest union in these islands, with millions of members in England, Scotland, Wales and the whole of Ireland, pursued such a strategy. Miliband killed this off, when he prepared the way for the Grangemouth fiasco. Meanwhile, Galloway can not even get back into the Labour Party as an individual!

However, if Galloway was serious, he would have asked his audience to come and sign up for a campaign to reclaim Labour, and to get him reinstated. Instead, he decided that signing his latest books formed the best conclusion to this roadshow. This, and the  £10 entrance charge, probably tells you more about Galloway’s personal intentions than anything else.

The fundamental reply to Galloway is that, on September 14th, the people of Scotland are voting for constitutional change, not for Alex Salmond or the SNP. Back in 1979 and 1997, people voted for the Labour government’s constitutional changes, not for Labour. Labour’s Lord Robertson, later head of NATO, thought that after 1997 Devolution would see off the SNP. He was proved wrong. Salmond and the SNP leadership may also hold illusions that they will be the sole beneficiaries of any constitutional change in 2014. The Radical Independence Campaign not only thinks otherwise, but is prepared to organise to ensure that ‘Another Scotland is possible’.